BR Remote places the “intelligence” which stores camera positions, moves and timings, within the camera head, which simplifies the operator’s control of the cameras.

The camera head can be driven with a joystick, wheels or a pan bar system. BR Remote has used its own unique ‘predictive motion smoothing’ algorithm which makes positional control from wheels or PBS as smooth as it is with a joystick.

The Protean head is so quiet it can be placed by the orchestra in a concert and will not be heard. The new model combines zoom and focus with the built-in motion control, which enables a simple route to studio automation, with full Free-D metadata including for the lens.


It can be extended in both height and width to suit many lens and camera configurations and has options for IP or fibre control and fibre output.

BR Remote has added a host of other features including new control protocols and built-in profile moves. 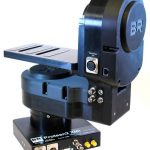