Faced with ageing infrastructure that was impacting the creative team’s ability to deliver, A+E UK turned to Blue Lucy to provide a solution that put production needs first.

A+E Networks® UK, a joint venture between Hearst and Sky, is a leading media network reaching millions of homes across 100 countries. With a portfolio of popular, high-performing, and creative brands like HISTORY®, Crime+Investigation®, HISTORY2® and UK free to air BLAZE® their award-winning factual and entertainment content includes global hit franchises such as ‘Forged in Fire’ and ‘Born this Way’, as well as original local commissions including Al Murray’s ‘Why Does Everyone Hate the English?’

The network’s promo team is responsible for creating approximately 200 to 250 original pieces of content to promote these shows each month. This number scales up to 350 to 400 versions for different territories, and increases by another 25 to 30% once special projects like teasers, sales reels and internal comms are factored in. But until recently, the relatively small team responsible for these big deliverables was being held back by ageing infrastructure that was negatively impacting their business efficiency and creativity. 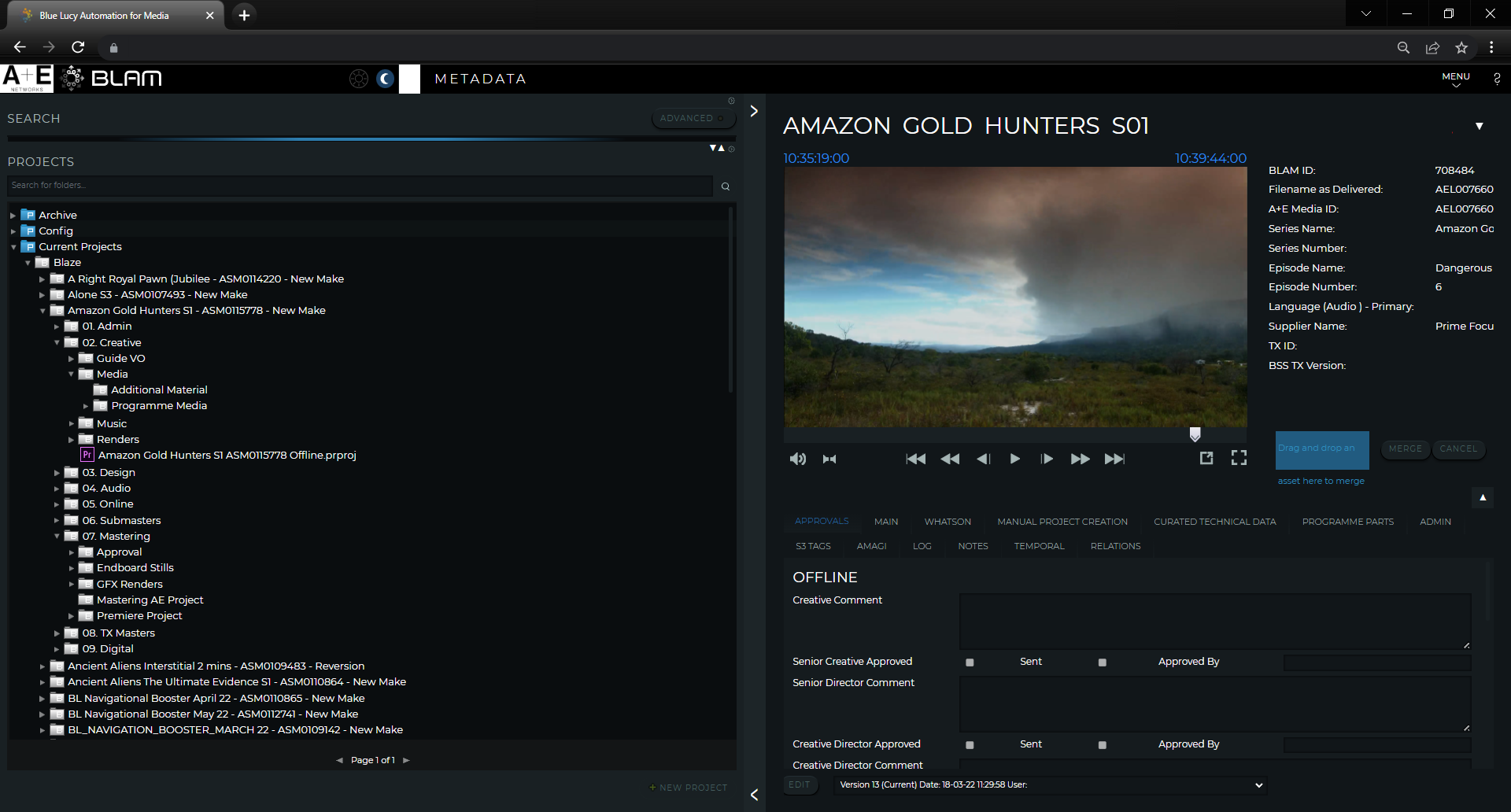 Held back by technology

While the media network had modernised many other parts of their operational stack, the asset management environment didn’t support the latest versions of Adobe Premiere Pro and they hadn't been able to integrate the post-production environment with their enterprise scheduling systems or distribution systems. The company recognised that their technology was inhibiting their creative capabilities and that they needed a dedicated platform that was best in class for content production and supply chain management.

Matt Westrup, SVP Technology and Operations EMEA at A+E Networks UK said: ‘’As a content and creative company, the creative platform is at the very heart of our business. We wanted to be able to have something flexible, intelligent and efficient, but that also had production and creativity at its heart in terms of a toolset and a platform.”

Spending time on the front line

By the summer of 2020 A+E UK was focussed on the growing risks of an ageing system infrastructure. But while the network has all the complexity, legacy and challenges of a broadcaster many times their scale – they are only a company of   200 people.  As Westrup points out, “We needed to find a partner to elegantly provide the solution we needed quickly and seamlessly.”

Blue Lucy was partnered by 7FiveFive, a company who have provided engineering, network infrastructure and post-production support to the network for many years.  A+E UK decided against a weighty RFP in favour of a lighter market evaluation saying, “What we liked about Blue Lucy is that they are a smart and ambitious team. We don’t have a large in-house or specialised technology team, so having access to the talent at Blue Lucy instantly gave us an advantage. As with all technology-led change, there is huge complexity, but Blue Lucy absorbed a lot of that complexity on our behalf and created simplicity for us.”

Blue Lucy takes a unique approach to project delivery.  The company takes accountable ownership of the overall technology solution delivery, and their software development team works alongside the end-user stakeholder groups.  In this case Blue Lucy’s developers spent six months working with A+E UK’s creative and technology teams to understand the issues. By being on the front line with the users and seeing first-hand the operational context, the Blue Lucy team were able to enhance the original requirement to maximise the creative and business benefits. William Piper, the Blue Lucy lead software engineer, explains, “Working alongside the creatives and business operators meant I was able to understand the technology and could propose enhancements, such as how contextual searches in workflows could help automatically find source material. This wasn’t in their original scope, yet it’s one of the valuable features of the platform for the Creative teams.” Dan Anscombe, A+E UK’s head of technical operations concurs, “Automated matching of content to campaigns has been a game-changer, meaning less time spent by creatives searching and more time on producing,” he says. 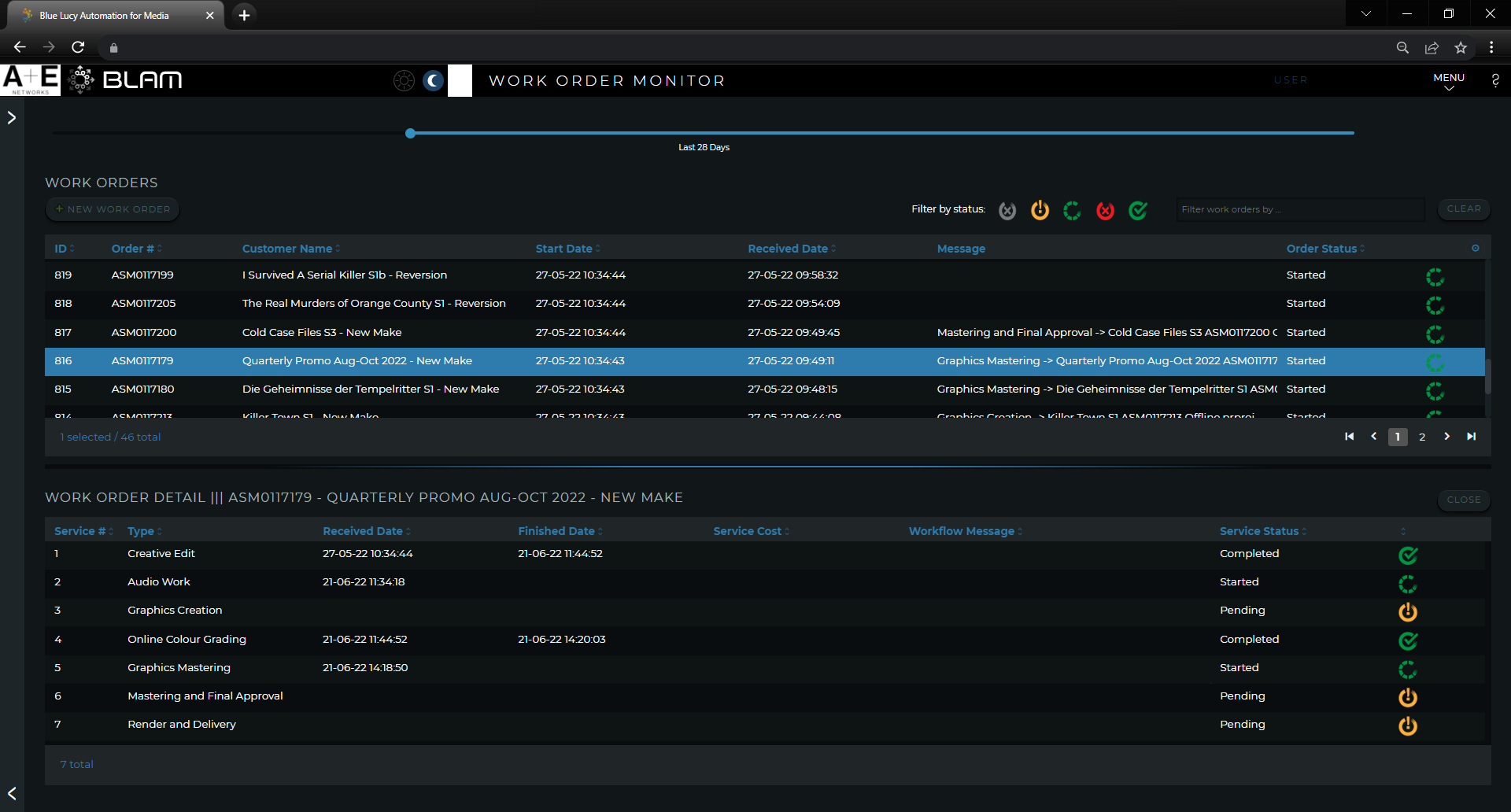 A solution with creativity at its heart

At the core of the solution provided by BLAM is the integration with MediaGenix WHATS’ON which A+E UK use to create their campaign plans and schedule promo production. BLAM imports this campaign data from WHATS’ON and uses it to automatically create a folder hierarchy for each campaign within the platform. It also creates placeholders for all the material that needs to be produced and gathers the source assets associated with the campaign (for example, the master programme for which a promo needs to be produced.

The result of this entirely automated process is that, when an editor opens the campaign in Premiere Pro, the media they need is already available and organised, and a sequence has already been created for them to begin working on. Piper elaborates, saying, ‘An editor can walk into their suite and have all the tasks assigned to them in pre-populated files. All the materials are there. They don’t need to go looking for the source material on the file-store. They don’t have to scan a spreadsheet for expected deliverables. It's all there in front of them in Adobe Premiere.”

Outside of Adobe, the BLAM WorkOrder capability orchestrates the entire post-production process: finishing, including audio mastering and colour grading, as well as the editorial approval process. The WorkOrders automation includes task management for technical operations as well as secure links and email notifications for the producer and compliance approval.

Aiden Hacket, Senior Creative at A+E UK says, “Blue Lucy has allowed us to work with the latest editing software whilst integrating with key systems like WHATS’ON, which means all our work is entirely managed in BLAM. This has given us the tools to swap manual workflows for automated ones such as creating projects and managing approvals for our creative work. With everything now available in one place, it makes for a far more cohesive, intuitive, and efficient process to work with.”

Implemented in the midst of the pandemic, the project was successfully completed in September of 2021 as Westrup explains, “If you'd said to me, you're going to put a system like this  in, avoiding a heavy procurement process and get it right the first time, I would have been a bit scared. But that's what happened with Blue Lucy.”

The next phase of development is to integrate the power of BLAM into A+E UK’s digital social teams who are increasingly expanding their short form production for social networks such as Facebook, YouTube, and Tik Tok.

Westrup has been pleased with the result of the project. He adds, “This has been a smooth integration, and the outcome is  more than we expected. The implementation of workflows and opportunities created by bringing media under management has improved our business efficiency and really allows our creatives to be just that, creative.”