R&S SpycerNode represents the first in a new breed of storage systems that harness the latest advances in High Performance Computing (HPC), a term that refers to the system’s performance, scalability and redundancy. HPC is a combination of hardware, file system and RAID approach. HPC employs redundancy using software “RAID” technologies called erasure coding in combination with declustering to increase overall performance and reduce rebuild times. Also, system scalability is almost infinite and expansion is possible during operation.

The most compelling aspect of R&S SpycerNode is its building-block characteristics. It provides the ability to build a single global name space with different speeds of storage node.

In developing R&S SpycerNode, Rohde & Schwarz engineers have looked at many of the key issues that impact on media storage systems within high-performance video editing environments from annoying maintenance requirements – such as defraging – to much more serious system failures including dying disk drives, which can have catastrophic consequences to a project that is being worked on.

R&S SpycerNode features Rohde & Schwarz‘s device manager web application which makes it much easier to set up and use Rohde & Schwarz solutions in an integrated fashion. Device manager helps to reduce setup times and simplifies maintenance and service due to its intuitive web-based UI operated through a single client.

A critical requirement of any high-performance video storage system is proven data security. In developing R&S SpycerNode, Rohde & Schwarz has introduced data protection systems based on erasure coding and declustering. Erasure coding means that a data block is always written including parity.

Declustering is a part of the data protection approach of HPC setups (formerly known as RAID). It is software based and in comparison to a traditional RAID setup the spare disk is spread over all other disks and is not a dedicated disk. This will decrease rebuild times and reduce performance impact. Also, there are no limitations with the RAID controller, which results in much higher IOPS (Input/Output operations per second). Importantly, there is no impact on system performance over time due to declustering.

R&S SpycerNode comes in multiple 2U and 5U chassis designs, which are available with NL-SAS HDD and SAS SSDs in different capacities. An additional 2u24 chassis design is a pure flash system. There are main processor units and JBOD units. A main unit is always redundant, equipped with two appliance controllers (AP). Each AP features two 100 Gbit interfaces resulting in four 100 Gbit interfaces per main unit.

The combination of different chassis systems makes R&S SpycerNode applicable to a very broad range of applications. The 2u system represents a compact, lightweight unit that is ideal for application within mobile productions as well as offering a very dense, high speed storage device for on-premise applications. A larger 5u system offers sophisticated large-scale storage facilities on-premise within broadcast production centres and Post facilities. 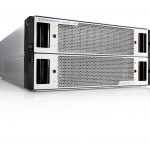