videoReferee®, which has been used for many years across sports such as ice hockey, basketball and handball has now been adapted to accommodate soccer’s recently introduced FIFA obligatory requirements.

Designated videoReferee-FC, the compact 4U video server records up to 24 3G/HD channels and has four graphics outputs. It has a separate multi-viewer for all channels capable of displaying live and delayed video.  The system provides two fully functional and independent work places working with live, delayed for 2 seconds or recorded video.  Using the system, sports referees can analyze in-play action frame-by-frame, simultaneously viewing the action from several different camera angles.

Video inputs can be displayed from a single camera, in Quad view (four cameras) or in multi-viewer format for off-site situations. Also, it is possible to quickly perform and prepare analysis of an on-pitch incident at the assistant’s work place (AVAR) and transfer it to the main on-pitch (VAR) system for referees to review during the match.

“As we witnessed at the recent FIFA World Cup Finals, VAR technology can revolutionize live sports, taking a lot of pressure from the referees who operate in extremely stressful environments,” commented Michael Gilman, CEO of slomo.tv. “We believe our new version of videoReferee® will interest numerous other sports administrators and broadcasters.” 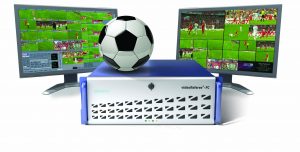