Since more and more manufacturers use 12G SDI interfaces for working with 4K (UHD), we equipped the server with universal 12G / 3G / HD / SD video interfaces. This allowed us to realize the ideology of "one (BNC) connector for all standards". This perfectly fits modern cameras and mixers and significantly reduces the number of connecting cables.

The new server uses the same connections for all video resolutions. Nothing needs to be switched or reconfigured when switching to another video standard.

Dominator AT/12G 4K has all distinctive features of slomo.tv servers:

·        Search on all recorded channels, simultaneously with recording and playing back of two channels with transition effects.

·        MultiSkin. This feature allows the operator to use one monitor to display different interfaces.

·        Export/Import of video without additional equipment. The export function of Dominator AT/12G enables the export of recorded video into native MXF files with XDCAM422 50Mbit codec for 3G/HD and QuickTime ProRes 422 for 4K video.

·        10 GbE network interfaces. Dominator has two 10GbE interface ports, which provide 10 times higher speed of video and data exchange compared with standard servers.  In addition, the presence of 10GbE makes it possible to record video files on NAS, to be used without delay for real-time video editing. 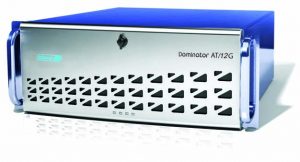