They had been using a similar analogue monitoring system for many years and when they updated their production mixer to a Dante enabled desk they naturally wanted to encompass and embrace the advantages of the network audio system to include their monitoring and musical instrument pre-amplifiers.

The shape and feature set of the Symphony came from the customer's many years of experience from within the orchestral music industry. The simple controls for the musicians, the microphone amplifier setup hidden away from the musicians, the ability to mount the Symphony on a microphone stand and a clean blank audience facing side of the box were all key required features.

Being a high calibre audio environment naturally the microphone amplifiers and monitoring circuits had to be the best available, which was made possible because of our many years of experience in broadcast audio.

Pro Sound news ran an article in June 2017 highlighting the history & requirements for the Symphony.The Symphony is designed to be mounted on a microphone stand and placed between 2 musicians.

There are 2 Dante network interfaces allowing a fully redundant netowrk to be set up with primary and secondary Dante networks. Both of these interfaces are on Neutrik Ethercon connectors and both accept Power Over Ethernet (PoE). 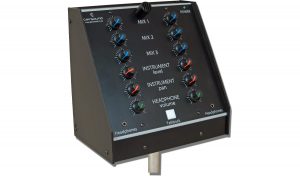 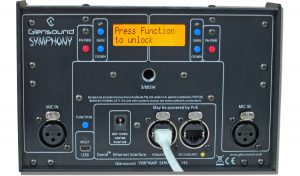 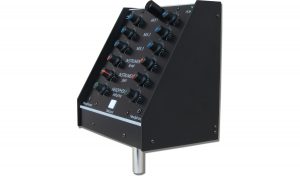