The Signature SD1+ is a silence detector used to switch audio to a backup source when the primary audio source falls below accepted silence thresholds in level or time. These are often used on a broadcast path to prevent dead air should a technical problem occur with the audio.

The audio connections are stereo, on analogue XLRs. There is an input pair for the primary source, and an input pair for the backup source. The SD1+ can also be configured as a twin single channel silence detector. The backup source is usually coming from an audio player which can be remotely started by the SD1+ via a GPO should silence be detected.

Each channel can have the configuration parameters set independently. The threshold at which the unit detects a low level is configurable, as is the amount of time that the audio needs to be under this level before an alarm condition is triggered and the audio is switched to the backup input.

A comprehensive set of GPIOs allow for triggering external devices when the secondary input has been triggered.

Intelligent modes can be set to allow for switching back to the primary audio source once a sustained audio level has returned.

With a stereo audio source, if one channel should fail, the SD1+ can be set to switch this single input to both outputs, making a problem unnoticeable to any listeners, whilst at the same time still providing alarm outputs so the engineers can be alerted.

An internal switch mode power supply is provided along with an external ±12v DC input for the main or backup power supply of the Signature PS1 Power Station.

Silence Detection ParametersFor the detection of drops in audio level, a threshold can be specified between -60dB to -10dB. If the audio level is under this level for a set amount of time, then the SD1+ will switch to the backup source, preventing any dead air situations. The fail delay time is configurable between 5 seconds and 5 minutes. When the audio switches to the backup source, a GPO is triggered to start a backup audio source which is connected to the backup input. A GPO is created so that the engineering department are alerted. All switching between the primary and backup source is silent.

When primary audio has returned, the SD1+ can be used in manual or automatic mode. In automatic, the SD1+ switches back to the main input after a recovery delay, that’s configurable between 5-60 seconds. In manual mode, the main input must be selected via the front panel or via a GPI switch.

Stereo Or Dual MonoThe SD1+ can monitor a single stereo source and switch the output to a backup source if a silence condition is triggered. It can also act as a dual mono silence detector, taking in 2 mono sources and switching them independently, to their own backup audio in the event of a silence condition trigger.

In stereo mode, if one channel becomes silent, the SD1+ can perform two configurable functions. It can either feed the one good primary input to both primary outputs, or trigger the silence detect to switch to the backup input.

Smart Fail & Smart RecoverySmart recovery mode prevents pops and clicks from triggering the recovery switch back to the main input, and waits for a configurable period of time. This allows full recovery of the audio before switching back to the primary source.

LoopsA 25way d type connector contains all of the available GPIO, for output remote starts and alarms, and for input switching. There are GPOs to indicate if the primary or backup input is active, which can be used as an alarm that a backup switch has been activated.

Configuration ScreenA front panel screen shows visual feedback of the status of each input, and the value of the fail or recovery timer. This screen also access’s the menu for configuration.

Bypass RelaysIn event of power failure the primary audio input is switched directly to the audio output via relays, so that there is no loss of audio.

Power SupplyThe SD1 has an internal switch mode 100-240v AC power supply using an IEC connection. There is also an external ±12v DC input to connect to the Signature PS1 Power Station as the primary or backup power supply.

19" Rack Mount EarsA Signature unit can rack mount in a 1U 19” rack, regardless of the size of the unit.  Rack ears are included as standard with every unit.

Front Or Rear MountingA Signature unit can be rack mounted via the front panel or if it is more convenient, via the rear panel by simply swapping the rack ears over.

Side Wings For Flat Surface MountingA Signature unit has side wings with mounting holes at the top and bottom, allowing flush fixing from above OR underneath.

12V DC Power ConnectionAll Signature units (except PS1) have a 4 pin XLR ±12V DC  socket for connection to the PS1 Power Station.  This can act as the primary or backup power source. 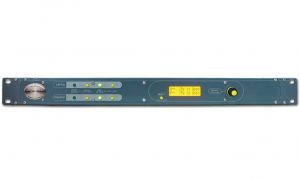 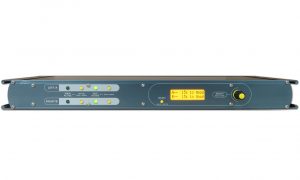