Produce traditional landscape (16:9) & vertical (9:16) video from a single 4K camera with built-in streaming. The KMU-200 allows users to output multiple landscapes or portrait pictures simultaneously just by creating cutouts of a 4K input using the 14” touch screen. The HD output signal can be streamed to many mainstream live-streaming platforms and output video can be recorded on an SD card. The KMU-200 features virtual camera control, switching, audio mixing, streaming and backup recording within one compact unit, which is an ideal product for content creators who want to live stream their content to social media platforms. Video productions that are traditionally done by multiple crew members now can be done by one person using the KMU-200.

The KMU-200 is a single unit that allows users to convert a 4K input signal to a 1080 HD output signal. An auxiliary HDMI input is also available for Skype or other sources. Hardware control is available on the unit to control the created cutouts, giving control over zoom, tilt, and pan of the virtual camera with a convenient joystick. Professional illuminated buttons control the switching of a maximum of 6 shots: 4 cutouts, the full image, and the auxiliary input.

Furthermore, its 14" capacitive touch screen allows users to easily control of picture selection and camera operations. Users can control the picture selection of the KMU-200 by not only the joystick but also by gesturing and pinching directly on the touch screen. This intuitive control method is suited for inexperienced users who are used to tablets and other touch screen interfaces. 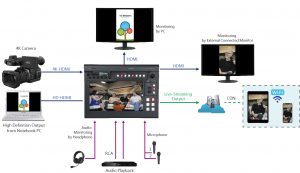 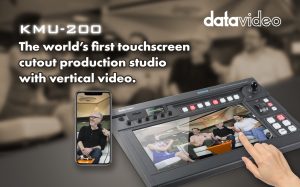