The DARK1616S is a versatile break in/ out box for sending/ receiving both analogue and digital (AES3) audio to/ from a network utilising the Dante audio over IP (AoIP) protocol.

In total there are 16 channels of audio sent from the Dark1616S into the network. The Dark1616S has 8 of AES3 inputs and 16 of analogue inputs. Using the GlenController App it is possible to set which inputs (AES3 or Analogue) are being sent to the Dante/ AES67 network, an auto mode is available that sends AES3 (when a valid signal is detected) in preference to the analogue input.

Simultaneously there are 16 channels of audio being received from the network by the Dark1616S and these incoming circuits are provided as outputs from the Dark1616S in both AES3 and analogue.

The AES3 outputs have sample rate converters on them and can be locked to the sample frequency of the Word clock input, the first AES3 input or to the Dante network.

A Word clock output is also provided, this is clocked at the same sample rate as the Dante network and can be used for locking external equipment to the network's sample rate.

The unit can be remote controlled using our GlenController Windows 10 App. The App allows such things as the dBFs levels to be set, clock masters and also provides input/ output metering. See the App tab for further details.

For ease of cabling audio I/O is presented on D25 sockets to the AES59 standard (Tascam wiring convention) for which there are a number of reasonably priced break out cables available from multiple suppliers.

Being designed for resilient broadcast applications, the Dark1616S features both redundant power supplies and redundant Dante network links with link status GPOs (general purpose outputs (solid state relays)). Both primary and secondary network links are provided with both magnetic (copper RJ45) and fibre (SFP) interface connections. The Dante system itself provides a completely transparent redundant link system which means that if the Dark1616S lost its primary link circuit the secondary link would automatically take over with no loss of audio.

The primary and secondary network interfaces are routed internally via a network switch.  It is possible to set this switch to work as a traditional network switch instead of the default redundant mode.  This means that there would be just one link to the Dante network and the other connections of the switch could have other Dante or network devices connected to them. As with all Dante devices, once set up, Dark1616S units can be directly connected with each other with no external network hardware. 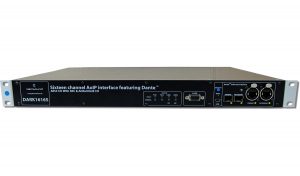 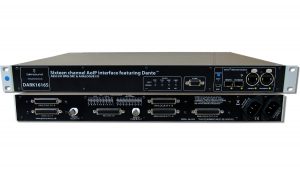