The DARK88 MKII is a versatile break in/ out box for sending/ receiving analogue audio to/ from a network utilising the Dante audio over IP (AoIP) protocol.

In total there are 8 channels of audio sent from the DARK88 MKII into the network. The DARK88 MKII has 8 of analogue electronically balanced audio inputs on Neutrik XLRs.

Network sample rates of up to 192KHz are accommodated seamlessly within the DARK88 MKII.

Being designed for resilient broadcast applications the DARK88 MKII features both redundant power supplies and redundant Dante network links. Both primary and secondary network links are provided with both magnetic (copper RJ45) and fibre (SFP) interface connections. The Dante system itself provides a completely transparent redundant link system which means that if the DARK88 MKII lost its primary link circuit the secondary link would automatically take over with no loss of audio.

The primary and secondary network interfaces are routed internally via a network switch.  It is possible to set this switch to work as a traditional network switch instead of the default redundant mode.  This means that there would be just one link to the Dante network and the other connections of the switch could have other Dante or network devices connected to them. As with all Dante devices, once set up, DARK88 MKII units can be directly connected with each other with no external network hardware.

On the front panel, LEDs indicate the status of the 2 power supplies and the 2 network links. GPO status outputs are also provided for external indication of the power supply & network status.

Network connections are placed on the front panel of the DARK88 MKII in order that the network cables (or fibres) match those of a rack mounted professional network switch, making installation and tracing interconnecting cables easy. Fibre connections are via SFP slots, meaning that users can select their own preferred fibre type & connector style by installing their own fibre SFP modules (a selection of modules is available from Glensound if preferred).

The DARK88 MKII features the Brooklyn module from Audinate which is AES67 compliant. 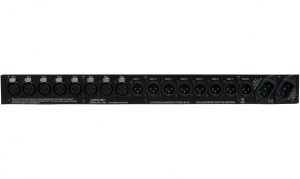 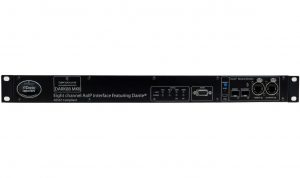 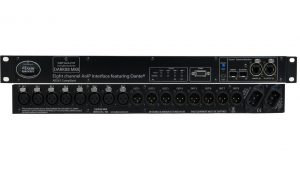