VSNLivecom is a studio playout system based on VSNMulticom‘s engine, VSN’s MCR automation solution with over 25 years of presence in the market. The studio playout controls up to 16 video server channels (4 in A/B/C/D rundown, 4 auxiliary channels and their redundancies). It is MOS compatible and is integrated with most NRCS systems available in the market, like Avid iNews, ENPS, Octopus 8 and Ross Inception amongst others.

VSNLivecom is a playout studio system compatible with the MOS protocol that can be integrated with most third-party NRCS systems currently available in the market. The integration of VSNLivecom with already existing systems is quick and perfect, consolidating a solid and robust playout process.

Its User Interface (UI) allows to operate the system by using multiple screens, as well as to totally customize it to meet the demands of its users, maximizing their experience and helping them to improve productivity. VSNLivecom’s main rundown allows to control up to 4 channels with its corresponding redundancies (8CH in total). Also, there are 4 more multipurpose lists for auxiliary channels (the system can handle up to 8 auxiliary channels) that can be used to launch studio resources, make previews or just for playing out different content to those in the rundown. In this regard, VSNLivecom even includes trim, loop, slow motion and other functionalities to further increase the potential of these auxiliary playlists.

The list of devices and video servers that VSNLivecom controls is inherited from VSNMulticom MCR system, allowing for the support of a very wide range of products. Some of the VDCP servers supported are: VSNOne TV, DVS, Grass Valley K2, Harris Nexio, Harmonic Omneon, Seachange and EVS, among many others.

Its revolutionary architecture has been designed to allow maximum simplicity, reliability, flexibility and high availability, while its client-server architecture allows different clients to connect to the same studio playout engine.

Moreover, VSNLivecom also allows for the configuration and change of the system without affecting the operation. Devices can be stopped without having to interrupt playout. Also it is possible to customize the operation views, for each studio and user and keep the settings for future sessions. 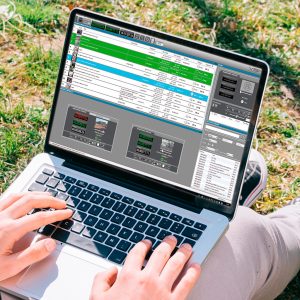