VSNMulticom, VSN’s Playout Automation Software, which has been in the market for over 25 years, guarantees 24/7 seamless broadcast in single channel environments and big playout centers alike. It allows for an exhaustive content and broadcast workflow control plus maximum reliability and security for a safe broadcasting. The wide range of devices that it controls, as well as its capacity to integrate with many other hardware and software modules, make it a powerful and open system ready for every work environment.

VSNMulticom is an advanced solution for the automatic broadcast of mono/multi channel TV that allows for an exhaustive content and broadcast workflow control, while providing an absolute security and robustness for 24x7 broadcast. One of its most competitive advantages is its independence from the equipment already installed in the broadcast infrastructure, since its homologated by manufactures such as EVS®, GrassValley®, Sony®, Avid®, Brainstorm®, Chyron®, Seachange®, Omneon®, Vizrt® and Pesa®, among others. Moreover, it is the only automation system that offers a global digitalization solution integrated with all the production, writing and archiving system, such as ENPS®, Avid®, EVS®, Front Porch®,Tarsys®, etc.

VSNMulticom’s simplicity allows to administer the system in an integrated way, no matter how complex the devices/inputs structure may be. There is no limitation in the number of devices to control, while the lists to control can be up to eight. The system allows to identify concepts, inputs and devices in an intuitive way. In a very simple manner, the user is able to drag & drop video content to create the rundown, making the task much easier.

Also, it proposes a flexible group of modules that offer a consistent solution for all the different broadcast and ingest tasks, independently of the chosen channel configuration. The operation is similar, but the system architecture is scalable and can be replicated on demand in a simple an easy way, according to the desired redundancy levels. This architecture allows for configuring this channels (SAT, CATV, TDT, Analogic) in a very simple way, guaranteeing that its broadcasting chains (devices associated to every route) are managed safely and avoiding mistakes.

Finally, its capacity to control one of the widest devices range in the market, from VTRs, matrices, mixers, graphic and subtitling systems, GPI devices, Flexicart libraries and LMS, among others, makes VSNMULTICOM an open and affordable system in any case or circumstance. 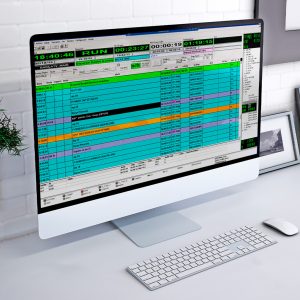