Viz Mosart 4 changes the studio production dynamic by adding live IP video support directly within the touch-based user interface, opening the door to entirely new workflows and allowing producers to build shows that can be run more easily, from a wide variety of locations. Further improvements to usability also mean that anyone in the organization is able to execute a pre-built show, reducing dependencies on limited resources.

Live sources in the interface

As a market first, Viz Mosart 4 features a fully customizable interface with interactive live sources. Viz Mosart integrates video over IP directly to your monitor to give an unrivaled view of the show – displaying any video source, program and preview directly in the user interface. Building on the software-based and IP leadership within Vizrt Group and NDI®, this setup can be deployed to an existing network environment and does not require radical infrastructure or monitoring changes.

Viz Mosart was made for breaking news. New functionality gives instant and unscripted access to assets including templates, show openers, and much more. The new graphics panel lets you access all your Vizrt graphics, preview them and then put them directly on-air. When combined, these tools offer true innovation and access to on-air news production in ways that have previously just not been possible.

The template organization capability introduced in Viz Mosart 4 significantly reduces the time spent on creation and maintenance of automation templates, allowing you to focus on your show and not the tools needed to create and bring your vision to life. 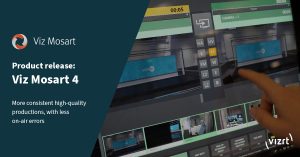