As a unique approach in the industry, the green screen video is composited with virtual graphics in 3D space. This technique results in real-time dynamic reﬂections of the physical objects and the talent on the virtual graphics.  Like reﬂections, refractions of physical objects are also created automatically in real-time. Reality Engine™ composites video by using 16-bit ﬂoating point arithmetic for HDR precision. Having the control of full compositing pipeline, all gamma and color space conversions are handled precisely. By using this technology, the real world and the virtual elements are blended seamlessly.

Reality Keyer™ is the world’s ﬁrst and only real-time image based keyer that works on GPU. Reality Keyer™ preserves real environment details such as contact shadows, transparent objects and sub-pixel details like hair.

Having the tracked camera feed as an input video, Reality Engine™ is able to render reﬂections and refractions of the real environment onto the virtual augmented objects. Real-time 3D reﬂections and the shadows of the virtual objects are also composited over the incoming camera feed simulated with 3D perspective.

Reality.net API gives possibility to users to develop their own 3rd party control applications for speciﬁc needs such as data driven graphics.

Reality Engine™ can feed your videowalls with high-resolution 3D graphics. By using camera tracking data, you can even convert your videowall into a portal to a virtual environment. Combining portal window with ceiling extension, you will be able to have a virtual studio without green screen.

When the talent tracking data acquired by Reality Engine, the engine positions the talent inside the virtual world in the correct position and depth. This technology automatically enables the creation of accurate reﬂections and refractions of the talent. Interaction between the real and physical is achieved with utmost realism thanks to Reality Engine’s industry ﬁrst and only feature of com-positing in 3D space. 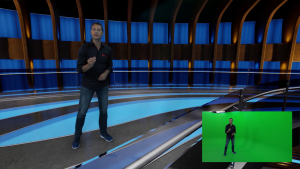